“POCKET CURATOR” is the free application which provides the information about the permanent exhibition with audio, text and images. It can be used with iOS and Android devices(smartphone, tablet, etc.). An internet connection is required to view these pages.
Download “POCKET CURATOR” from here.(Developer's Site).

1 Connect to the internet. (Please do not connect to our Free Wi-Fi until the installation is finished.)
2 Install the app.
3 Select English.
4 Select Kanagawa Prefectural Museum of Cultural History. 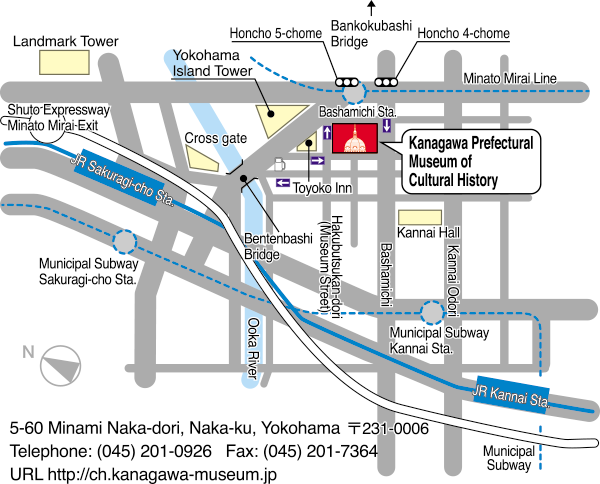 Theme 1: Those who Lived in Ancient Sagami Area

The Kanagawa prefecture area blessed with a warm climate and abundant natural is including many sites such as settlement, shell midden, cave site, tumulus (Kofun), tunnel tomb (Yokoana-bo), and temple. The present-day Kanagawa prefecture area covers ancient Sagami province and part of Musashi province.
This exhibition introduce a life of people of prehistoric period and ancient period (Namely, pal eolithic period, Jomon period, Yayoi period, Kofun period, Nara period, Heian period) with the use of artifact from various places within Kanagawa-prefecture or models of reconstructed sites.

Theme 2: Urban Kamakura and the People of Medieval Times

Displays of various materials portray the many facets of the history and culture of eastern Japan in medieval times, focusing on transitions in the samurai governments during the four centuries that began with Minamoto no-Yoritomo's establishment of the Kamakura shogunate. They portray the rise of the Kamakura government following the Shogunate's downfall and up to the collapse of the latter-period Hojo clan that held sway over the Kanto region from its Odawara base during the Warring States era. Aspects of common people's lives are seen through items excavated in downtown Kamakura; interaction with faraway China; and the Zen, Jodo sects, and Nichiren Buddhist sect that attracted fervent beliefーjust some of the various topics the exhibition covers.
Works of art and crafts itemsーincluding pottery, lacquerware carved in the Kamakura style, ink paintings, sculptures of Buddhist images, and stoneworkーare also displayed in abundance in each section. A room in the style of the Middle Ages has also been reproduced that includes a life-size reconstruction of Engaku-ji temple's reliquary hall.

Theme 3: The Highways and Popular Culture of Early Modern Times

The Kanagawa Prefecture region bordered the metropolis of Edo in the early modern era. The Koshu-Kaido highway connected Edo with the Koshu and Shinshu regions, crossing the edge of the northern region, and the Tokaido highway linking Edo and the Kyoto region passed through the southern section. Of the two, the Tokaido highway was a main trunk line that passed through castle towns, inn towns, and checkpoints, with famous and historical sites that included sacred Mount Oyama, Kanazawa Hakkei, Enoshima island, and Kamakura, as well as Hakone's hot springs spas in the vicinity of the highway. We can see diverse local characteristics from these.
Related exhibits include old documents, paintings, maps, ukiyo-e prints, and models, providing an introduction to what characterized early modern Kanagawa, including how the highways appeared, the prosperity that sprang from commoners' religious beliefs and pilgrimages to famous places, the villages and people that sustained the highways, and the commodities that sustained life in Edo.

Theme 4: Modernization and the Opening of Yokohama's Port

Reference materials provide insights into distinctive aspects of Kanagawa's modernization, such as interchanges with foreign countries under "the national seclusion," Commodore Matthew Perry arrival in Japan, opening the treaty port of Yokohama to the rest of the world, westernization throughout the area of Kanagawa Prefecture, the civil rights and freedom movement, and the development of various modern industries.
There are also exhibits of ukiyo-e prints depicting Yokohama scenes, modern paintings, newspapers, old photographs, and other materials related to Yokohama's culture and customs during that time.
Furthermore, now designated as an important cultural treasure and national historic site, the Yokohama Specie Bank main branch buildingーwhich was completed in 1904 and has been converted for use as the Kanagawa Prefectural Museum of Cultural Historyーis featured extensively in exhibits of reference materials.

Exhibits show how changes in Kanagawa Prefectureーfrom the Great Kanto Earthquake and subsequent reconstruction, socioeconomic upheavals in the wake of the Showa era depression, military facilities during the 15 years of war, postwar reconstruction and the impact of Occupation policies all the way up to the economic boom eraーaffected the lifestyles of Kanagawa residents.
The implements and modes of everyday life passed down from parent to child and child to grandchild underwent modernization from the mid-1950s, and traditional culture began to fade away. Additional exhibits of materialsーincluding tools from various professions and materials related to religious beliefsーare meant to encourage visitors to ponder our former lifestyle culture deeply.

Exhibitions designed around specific topics are held in the special exhibition gallery on the first floor of the museum.

The museum displays various items gathered for its collection. No admission is charged to view the gallery, which is located in the free access section on the first floor of the museum.